This blog will consider potential Democratic Candidates as they could stand in August 2015. Typically, at this stage of the race the candidates with the greatest name recognition among potential voters will have the higher numbers in these early polls.

In 2015, a Monmouth University poll showed Hillary Clinton with 60% of the vote, Joe Biden with 16%, Bernie Sanders with 7%, Martin O’Malley with 2% and Jim Webb with 1%. When Clinton was omitted from the poll (and several other Democrats added), Biden received 34% as front-runner, following by Elizabeth Warren 18%, Sanders 8%, Andrew Cuomo and O’Malley both with 4%, Webb, Deval Patrick, Cory Booker with 3%, Kirsten Gillibrand with 2%, and many with 1% or less. One would hardly guess that Bernie Sanders would prove competitive.

As such, by August 2019, barring anything new and unusual breaking the trend, the frontrunner(s) for the Democratic pre-primaries is likely to be very clear. I’ve created what I think is a likely August 2019 Democratic Poll Map using and editor for Anthony Burgoyne’s President Infinity PC Game: 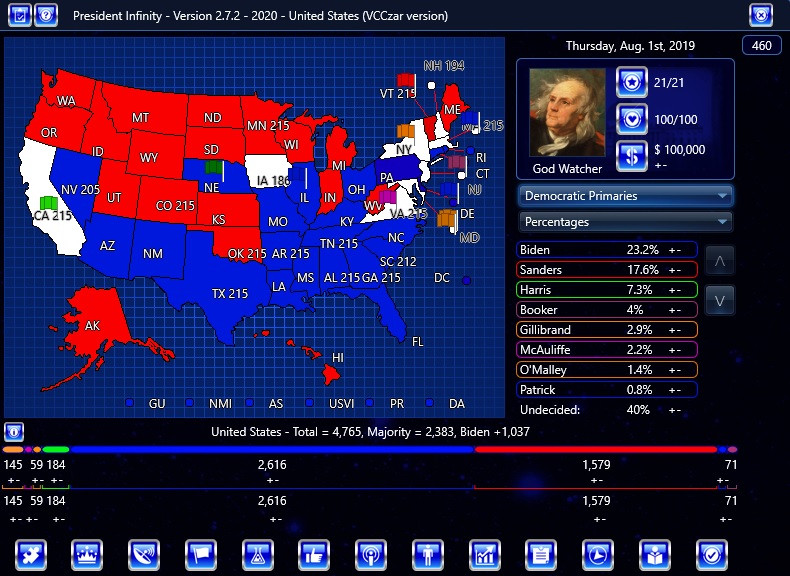 [*Note: God Watcher is a “candidate” for the “Simulation Party” that allows me to simulating an election without interfering in it]

Looking at the image above, we see the candidate percentages. Some candidates, like US Reps Gutierrez and Delaney are so low in the polls that they aren’t on this top 8 list. Biden and Sanders are clear frontrunners, with Biden scoring the majority of the delegates. The map is somewhat similar to the Clinton/Sanders primary map of 2016. While no other candidate seems close to overtaking Biden or Sanders, Harris is at 7.3% and Booker is at 4%, which shouldn’t be ignored when the majority of voters are likely undecided at this time. 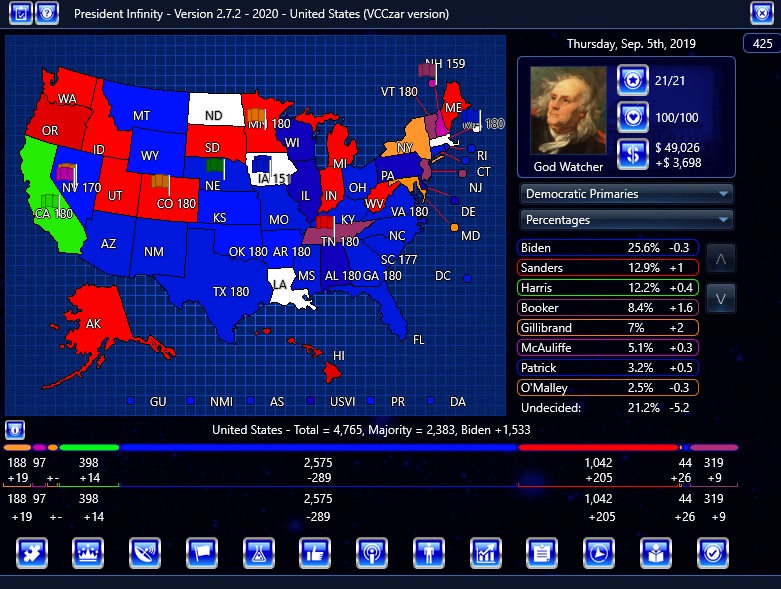 About a month later, Harris, Booker, Gillibrand, McAuliffe begin to assert themselves at the expense of Bernie Sanders and, to an extent, Joe Biden. 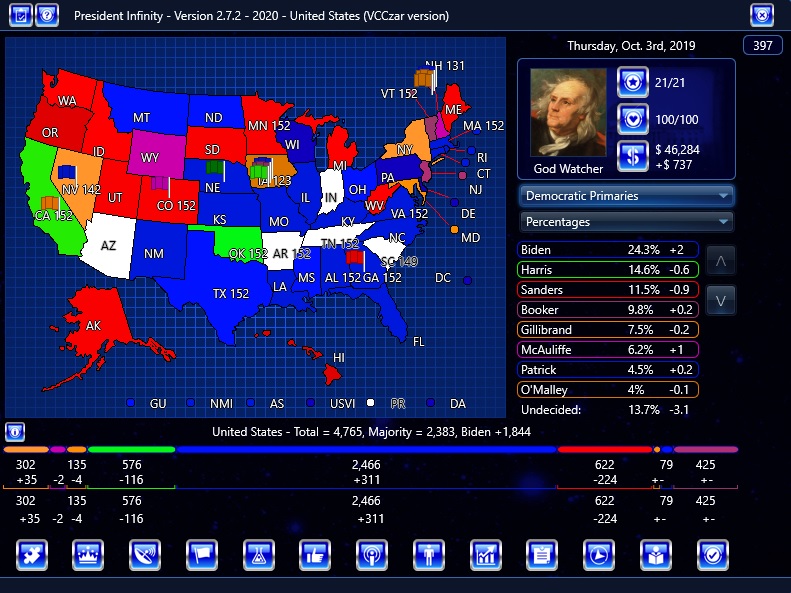 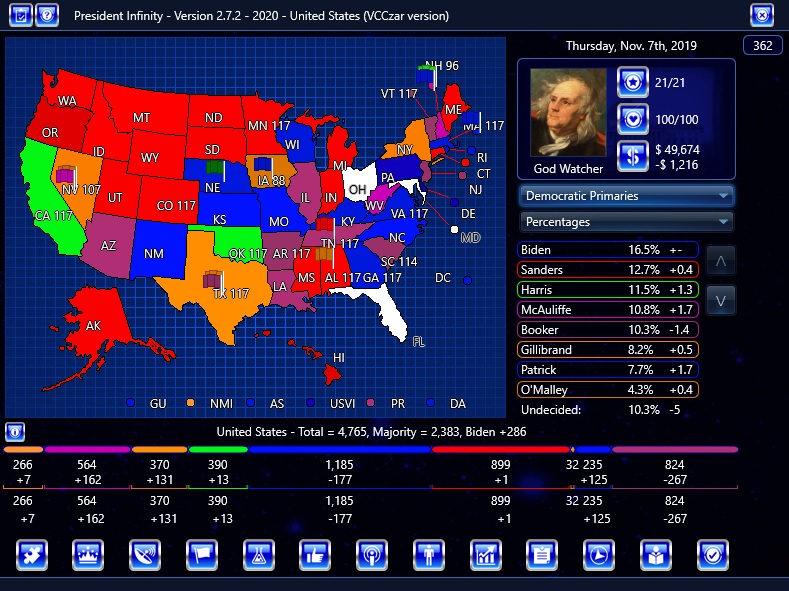 In November, Sanders appears to regained some momentum, surpassing Harris and coming within 4% of Biden in the polls. While Biden still leads in delegates, he no longer has enough to hypothetically wrap up the nomination. The election is a toss-up as we have seven candidates now in the running, as Biden’s campaign seems to be collapsing. 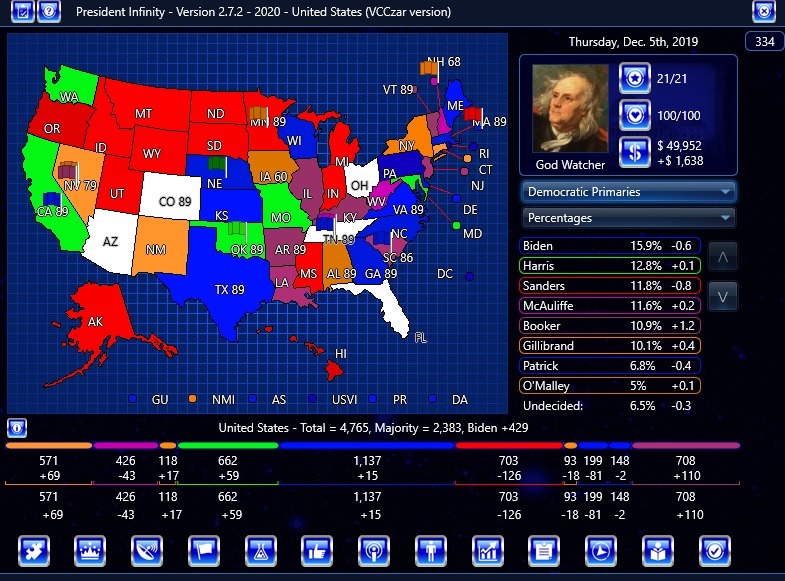 In December, Biden remains the front-runner with Harris once again the primary challenger. 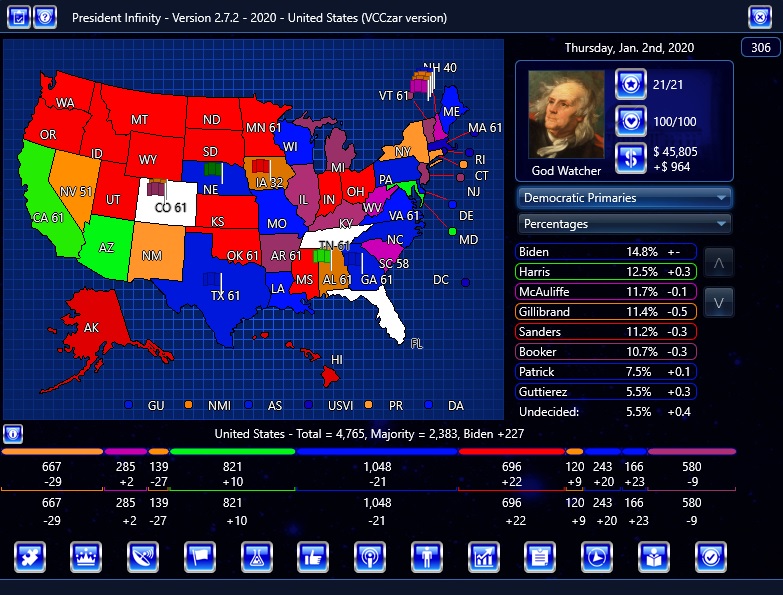 Heading into January 2020, O’Malley has disappeared in favor of under Rep. Gutierrez (his name is misspelled in the game). Bernie Sanders and Cory Booker have both fallen. As no one can settle on Biden or Harris, it seems very possible that McAuliffe or Gillibrand might rise before the Iowa and New Hampshire primaries. 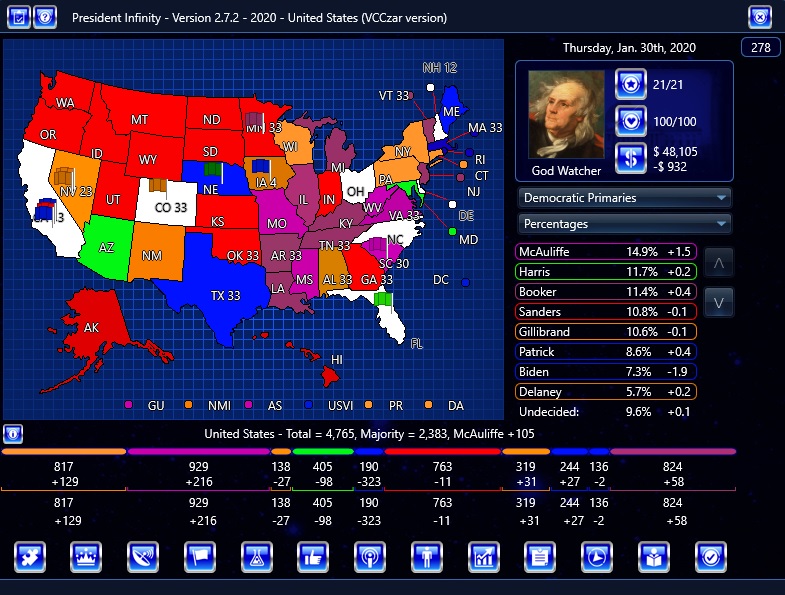 Four days before the Iowa Primaries, the Democratic shift drastically. Joe Biden has fallen from the top tier and is likely to drop out of the race. McAuliffe has emerged as the frontrunner with some serious momentum. Should Biden drop out, his votes might very well go to McAuliffe. Yet, Gillibrand is polling well in both Iowa and New Hampshire. Harris is also looking strong. In this scenario, both frontrunners have been replaced by relatively unknown candidates.

I’ll refrain from showing the primaries, since the game (as of April 11, 2018) doesn’t allow for candidates to drop out of the race, which makes a locked up convention likely about every time. Despite this, McAuliffe holds the lead going into this forcibly deadlocked convention. The race heading up to the primaries presents what I think is a fairly realistic scenario, showing that the original frontrunners, proffered up with their own name recognition, can often fall as lesser known names become more publicly known.

Personally, I’d find a McAuliffe ticket a little too standard and unexciting (like the Tim Kaine VP nomination in 2016). However, McAuliffe would likely govern better than the alternative nominee in the General Election.